Some Information about Bjarne Stroustrup 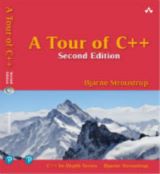 His research interests include distributed systems, design, programming techniques, software development tools, and programming languages. He is actively involved in the ANSI/ISO standardization of C++.

Dr. Stroustrup is a Professor of Computer Science at Columbia University.

He has received numerous honors:

His non-research interests include general history, light literature, photography, hiking and running, travel, and music. He lives in New York City with his wife; their daughter is a medical doctor and their son is a research professor in systems biology.

Bjarne Stroustrup is the designer and original implementer of C++ as well as the author of The C++ Programming Language (4th Edition), A Tour of C++ (3rd edition), Programming: Principles and Practice using C++ (2nd Edition), and many popular and academic publications. Dr. Stroustrup is a professor at Columbia University in New York City. He is a member of the US National Academy of Engineering, and an IEEE, ACM, and CHM fellow. He received the 2018 Charles Stark Draper Prize, the IEEE Computer Society's 2018 Computer Pioneer Award, and the 2017 IET Faraday Medal. His research interests include distributed systems, design, programming techniques, software development tools, and programming languages. He is actively involved in the ISO standardization of C++. He holds a masters in Mathematics from Aarhus University, where he is an honorary professor, and a PhD in Computer Science from Cambridge University, where he is an honorary fellow of Churchill College. Personal website: www.Stroustrup.com.

Bjarne Stroustrup designed and implemented C++. C++ has become one of the most widely used programming languages by making abstraction techniques affordable and manageable for mainstream projects. Using C++ as his tool, Stroustrup has pioneered the use of object-oriented and generic programming techniques in application areas where efficiency is a premium; examples include general systems programming, switching, simulation, graphics, user-interfaces, embedded systems, financial systems, AI/ML, games, and scientific computation. For about three decades, C++ has been among the most widely used programming languages. A Fall 2015 survey estimated C++'s users community to include 4.4 million programmers; now, there appears to be more (maybe 7 millions; programmers are hard to count). The influence of C++ and the ideas it popularized are clearly visible far beyond the C++ community. Languages such as C, C#, Java, and Fortran now provide features pioneered for mainstream use by C++. Recently, he has been engaged in a project to give meaning to "modern C++" as a completely type-safe and resource-safe language and help users to use it as such.

His book "The C++ Programming Language" (Addison-Wesley, 1st edition 1985, 2nd edition 1991, 3rd edition 1997, "special" edition 2000, 4th edition 2013) is the most widely read book of its kind and has been translated into at least 19 languages. A later book, The Design and Evolution of C++ (Addison-Wesley, 1994) broke new ground in the description of the way a programming language was shaped by ideas, ideals, problems, and practical constraints. His programming textbook Programming -- Principles and Practice using C++ (2nd edition), has been translated into 10 languages. His most recent book, A Tour of C++ (3rd edition) gives an overview of the C++ language and its standard library for experienced programmers. In addition to his ten books, Stroustrup has published more than a hundred academic and more popular papers.

In 1989, he took an active role in the creation of the ANSI/ISO standard for C++ and continues to work on the maintenance and revision of that standard.

He received many international honors for his work. It has been noted that he is to only Dane to receive the NAE Draper Prize, IET The Faraday Medal, the John Scott medal, and the ACM Grace Murray Hopper Award.

Bjarne Stroustrup is the consulting editor for Addison Wesley's C++ In Depth series. The aim of the series is to present ``short focussed books that directly address specific technical audiences.''

Bjarne was born in and grew up in Aarhus, the second largest city in Denmark. He went to the local schoools (Laessoeesgade Skole and Marselisborg Gymnasium) and to Aarhus University studying in the department of computer science (then called DAIMI) gaining the Danish equivalent to a good Masters degree by thesis (a Cand.Scient. degree is rarely taken in significantly less than six years - at least it wasn't then). Aarhus is a wonderful town of about 250,000 people beautifully sited on the East coast of Jutland.

Bjarne did his Ph.D. work on design of distributed systems in the Computing Laboratory of Cambridge University, England. The Cambridge Computer Laboratory celebrated its 75th anniversary in 2013 (The history of the CL is documented in a very nice and readable book). He is an Honorary Fellow of Churchill College where he and his wife, Marian, spent some wonderful and busy years and where their daughter was born. Cambridge is another wonderful town and one of the magical places of the world. His thesis advisor in Cambridge was David Wheeler and he also spent significant time talking with (learning from) Roger Needham. He didn't really get to know Maurice Wilkes until years later. He shared an office with Bruce Croft, Jeremy Dion, Neil Grey, David Harper, Andy Hopper, and Mark Pezzaro.

You can find a few more personal details and some information about the birth of C++ in Steve Lohr's Go to: The Story of the Math Majors, Bridge Players, Engineers, Chess Wizards, Scientists and Iconoclasts who were the Hero Programmers of the Software Revolution. Basic Books. ISBN 0-465-04225-2; 2001 and also in Paul McJones' interview for The Computer History Museum's Oral History Collection.

In 1979, Bjarne Stroustrup, together with his wife and daughter, moved to New Jersey to join the Computer Science Research Center of Bell Telephone Laboratories (colloqually know as 127 or 1127). Over the years, they lived in Summit, Meyersville, and Watchung - all about 10 minutes drive from Bell Labs' main research site in Murray Hill. A son was born in Meyersville. After the 1984 break-up of the Bell System, Bell Labs became AT&T Bell Labs, and after the 1995 break-up of AT&T, AT&T Bell Labs was itself split into AT&T Labs and Lucent Technologies Bell Labs. From its inception, Bjarne was a member of AT&T Labs - Research, the half of Bell Labs Information Sciences Research that AT&T kept to itself as Lucent and NCR were spun off.

Bjarne was the head of the Large-Scale Programming Research Department from its creation in AT&T Bell Labs until late 2002 when he joined the computer science department of Texas A&M University. He retained a link with AT&T Labs - Research as an AT&T Fellow until 2012.

From 2002 to 2014, Bjarne was the College of Engineering Chair in Computer Science Professor at Texas A&M University. He and his wife lived in a house in a quiet wooded area of College Station, Texas. After leaving for NYC in January 2014, he retains a link to TAMU as a University Distinguished Professor. He was a member of the Parasol group in the Computer Science and Engineering Department.

Over the years, Bjarne has spent significant time in the computer science departments of Cambridge, Columbia, and Princeton. In particular:

He is an honorary fellow of Churchill College, Cambridge.

From January 2014 to April 2022, Bjarne was a Managing Director in the technology division of Morgan Stanley in New York City. In 2019, he was promoted to be Morgan Stanley's first Technical Fellow. He retired on April 2, 2022 to spend more time of non-commercial C++ work, traveling, and with his family.

The move to New York was prompted by Marian and Bjarne wanting to be nearer to their children and (especially) grandchildren. Bjarne also wanted to refresh his acquaintance with critical software development. Academic concerns can distract from work aiming squarely at solving industrial problens (e.g., of scale and reliability).

As of January 2021, Bjarne is a technology advisor to Metaspex, a company that offers direct translation of Specifications to high-performance full-featured Cloud applications.

He and his wife live in New York City; their daughter is a medical doctor and their son is a research professor in systems biology.