The Design and Evolution of C++ 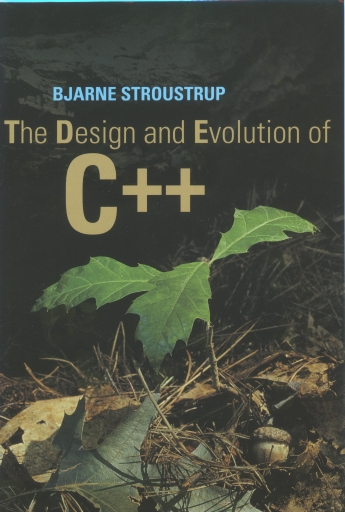 Order directly from the publisher!

I have been asked if D&E needs an update. The answer is not yet. From the point of view of language design, hardly anything has happened to C++ since the publication of D&E. The major concepts for the standard (such as, namespaces, exceptions, templates, dynamic cast) were in place when I wrote D&E. D&E focusses on language issues, so the major advances in library techniques don't affect it - especially as the fundamental language design decisions that made those advances possible are described in D&E. For example, I was aware of the STL at the time and some of the key STL design techniques are presented (from a language design point of view) in D&E.

Here is an extended foreword to Japanese translation of "The Design and Evolution of C++" from January 2005: C++ in 2005.

Once the current revision of the standard has stabilized, it might be time for a second edition, but that'll be a while yet. Language design issues, fundamental design decisions, and history don't change very often so D&E are more up-to-date than its copyright date might indicate.

Written by Bjarne Stroustrup, the designer of C++, this book presents the definitive insider's guide to the design and development of the C++ programming language. Without omitting critical details or getting bogged down in technicalities, Stroustrup presents his unique insights into the decisions that shaped C++. Every C++ programmer will benefit from Stroustrup's explanations of the 'why's' behind the language.

The Design and Evolution of C++ is written in a well-organized, easy-to-read style which is often instructive and occasionally entertaining. Key insights offer the beginner logical 'hooks' on which to hang understanding of the details of the language. This book also provides information and detailed discussions of key design decisions that will add to the expert's understanding. Features:

In this book, Stroustrup dissects the decisions made in the development of the language to present a case study in 'real object-oriented language development' for the working programmer. In doing so, he presents his views on programming and design in a concrete and useful way that makes this book a must-read for every C++ programmer.

For translations, see my publication list and my cover gallery.

Here are a few paragraphs from a review of D&E by Al Stevens written for Dr. Dobb's Journal, August 1994 (naturally, I have picked from my favorite bits of that review, but I haven't warped the sense of the review, omitted any damning criticisms, or in any way edited the paragraphs I quote):

This is an important book, an important addition to the culture, not only for its historical perspective, but for the insight that it provides into the process of language definition, development, and specification.

You learn a lot about C++ programming, even though that's not Stroustrup's primary purpose. In explaining why he accepted or rejected proposed features, Stroustrup offers examples of alternatives that reveal better ways to use C++ -- ways made possible by the underlying behavior of the language, ways that programmers discovered rather than designed. He often expresses his own surprise at their discovery, which adds insight to the complexities of the language. Even its creator has to discover (or be told about) an idiom that applies the language's underlying behavior to the expression of a particular solution.

The Design and Evolution of C++ is a study in language structure and design, revealing Stroustrup's resolute philosophy about how a programming language should work and what compromises are necessary to assure its success. Most criticisms of C++ fall into two categories, the legacy of language constructs that descended from C, and its static (compile-time) type checking system, which purists view as being less than object-oriented. Stroustrup deals with both. First, he could have built a better language instead of a better C. He could have assigned less importance to compatibility with C. "Within C++, there is a much smaller and cleaner language struggling to get out," which he says "would ... have been an unimportant cult language." Second, he is committed to the concept of static (as opposed to dynamic) type checking as being inherently safer and essential to retain the efficiency of C. Without that guarantee, programmers used to C's efficiency will not switch to a new language no matter what promise it holds.

We programmers sometimes believe that programming languages come from one of two places: large paradigm-polluting bureaucracies belching out behemoths such as COBOL and ADA, or independent free spirits who, in one bright light of inspiration, sit down and cobble a terse, elegant, language like C or C++ to endure for generations. This book tells a different tale, and you learn of the contributions of a number of collaborators both within AT&T and later on the Committee. Stroustrup gives credit where it is due and names names. Whether or not you like a feature or bemoan the absense of one, you can usually find out whose idea it was by reading this book. C++ is the product of the minds of many participants over a long period of time with Stroustrup as the focal point.

The Design and Evolution of C++ expands your understanding of C++ by explaining how and why it evolved. You will be more tolerant of some of its vagaries once you understand the alternatives. You will embrace new features after you've learned their motivations. You will anxiously wait for your favorite compiler vendor to release versions that implement the new features so that you can try them out. If you write C++ code, you need this book.