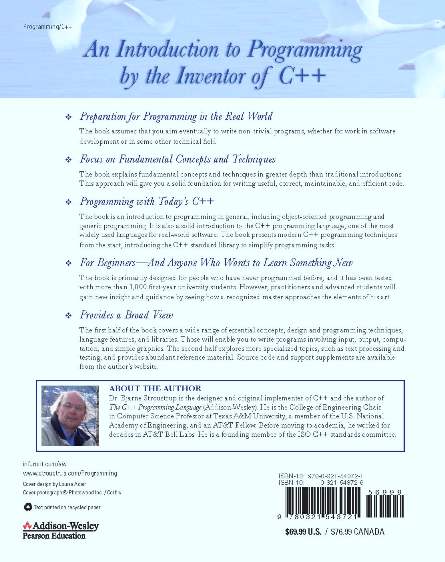 Order directly from the publisher!

Polish translation of this page.

No, this is not the 4th Edition of The C++ Programming Language (see the C++11 FAQ). It is an introduction to programming for people who has never programmed before. It will also be useful for people who have programmed a bit and want to improve their style and technique - or simply learn modern C++. It is designed for classroom use, but written with an eye on self study. Drafts and finished versions have been used as the basis for first programming classes for electrical engineer, computer engineer, and computer science students at Texas A&M University for seven years now.

Here are some samples

As stated in the book and on its cover, the support site for the book is www.stroustrup.com/Programming. This site is primarily aimed at educators (it is a textbook after all).

I wrote an academic paper to explain the role of the book (and the course based on it) in a more complete education: Programming in an undergraduate CS curriculum. WCCCE'09.

An Introduction to Programming by the inventor of C++

Preparation for Programming in the Real World The book assumes that you aim eventually to write non-trivial programs, whether for work in software development or in some other technical field.

Focus on Fundamental Concepts and Techniques The book explains fundamental concepts and techniques in greater depth than traditional introductions. This approach will give you a solid foundation for writing useful, correct, maintainable, and efficient code.

For Beginners -- And Anyone Who Wants to Learn Something New The book is primarily designed for people who have never programmed before, and it has been tested with more than 1,000 first-year university students [2013: Now it is more like 10,000+ students worldwide]. However, practitioners and advanced students will gain new insight and guidance by seeing how a recognized master approaches the elements of his art.

Provides a Broad View The first half of the book covers a wide range of essential concepts, design and programming techniques, language features, and libraries. Those will enable you to write programs involving input, output, computation, and simple graphics. The second half explores more specialized topics, such as text processing and testing, and provides abundant reference material. Source code and support supplements are available from the author's website.